The Trail of the Lonesome Hiker


He planned to start his hike on April 1st. I teased him, saying, “Is that so that if you change your mind before the day is over you can say ‘April Fools’?” He answered, “No, I won’t change my mind, I’ve been planning this for months.” And he had, I just hadn’t heard anything about it. But, then, where’s the boy that confides his plans to his grandmother?

We always thought of him as the scholar of the family — the only one of four siblings who went on through school, after the first several years of home-schooling finishing high school [editor’s note: GED], then college, then grad school, getting his PhD in Computer Science at 28.

We’ve always viewed him with awe and admiration, this slight, quiet boy who practically lives on bread and cheese, never weighing more than 120 lbs. We knew he would not be an athlete, though he was remarkably accurate when sending a basketball flying toward the hoop.

When Jeff graduated from Carnegie Mellon he announced that he would be working for Microsoft — for at least a year. We didn’t know what about the bee he had in his bonnet, so to speak. We knew that he rarely drove the old car he had inherited from someone in the family, preferring to walk everywhere, but we didn’t know he was making plans to hike the A.T., all 2100+ miles of it. He only made that public when he told his family and Microsoft that we would be taking early retirement — as he put it to us — and preparing for this trek starting in Georgia and going to northern Maine. He had 6 months to get ready, since the best time to start hiking in GA is early April.

I had misgivings about the boy running off to the wood after only one year in the work-world, and for many reasons. I probably shared them all generously during the 6 months he lived with his father in the apartments above us.

Jeff started on schedule, with his backpack which he proudly showed us as it hit the scale at under 17 lbs. “It’s an ultralight”, he proudly told us, “everything in it is ultralight.”

I had useful advice for him — Don’t forget sunscreen. “Got it,” he responded. And bug spray? “That, too.” Anything that I, who had never hiked further than a couple of miles at a time, could suggest, he had already thought of.

“Well,” I said, “Take paper and pencil, so you can take notes and tell us all about it when you get back.” He smiled a gentle smile. “No need,” he told me, “I have a Kindle with a wireless connection. I can make a journal entry every day. Anybody that wants to can read it.”

I wanted to believe him — after all, if he studded about computers for the last 10 years, of course he would know the electronic possibilities.

“See you in 5 or 6 months,” he called as he left with his grandfather who was taking him to Springfield to catch a train to Georgia, to start the long walk back.

That was 3 weeks ago. He did indeed start the journal, even before he got to the start of the trail to start his new adventure. I was surprised and delighted as he chronicled his own internal process, as well as the logistical steps necessary before heading north.

Now after 18 days on the trail, he has had many ups and downs, literally, and every single evening he has written his adventures of the day, at least 1000 words written on the Kindle, and every single evening — or the next morning — this grandmother has felt she was part of this northern migration of backpacking hikers, each of whom take — or is given — a trail name, and who learn to overcome unexpected and sometimes dangerous encounters, and many moments of breathtaking beauty and serendipitous meetings.

Whatever happens, these next few months are bound to change his life. It seems to be already changing mine.

I knew this grandson was a whizkid with computers, but as a writer, I now consider him a genius. 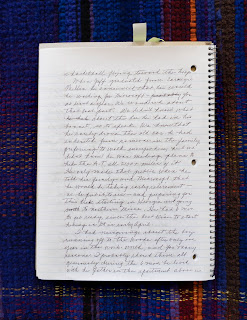 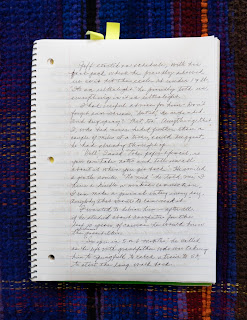 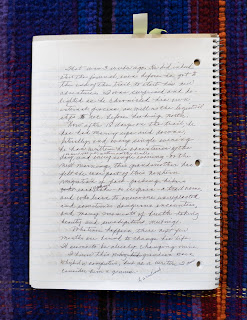 Popular posts from this blog

May 15, 2021
Start: May 10, Mile 698.1 End: May 10, Mile 719.4 Hiking early in the morning I see a sign on the ground made from sticks and leaves. 700, it proclaims, marking 700 miles from Springer Mountain. Handmade mileage signs are one of my favorite hiker traditions, a way to celebrate mileage milestones with other hikers, each sign unique -- the pine cone one, the rock one, the sticks and leaves one. A pet peeve of mine is inaccurate markers, although the rise in popularity of GPS apps has made these more rare, thankfully, also curbing the proliferation of a duplicate mileage markers. Right around the 700 mark, the trail greets me with a riotous explosion of flowers. My favorite are the lady slippers, bright pinkish purple flowers lining the trail. I meet a ridgerunner who tells me that she's on the lookout for spray painted signs. I tell her I haven't seen any, and she says that someone has been defacing trees, and she might just crouch there by the 700 marker like the Lorax. She tell
Read more

Appalachian Trail 2021, Journal Entry 19, The Story of How They Met

May 21, 2021
Start: May 15, Mile 823.2 End: May 15, Mile 843.5 I get up before 6 and leave before any of the 20 other people in or around the shelter, wondering which if any of them I will see today. I see two older hikers sitting in the trail, and squeeze between them to pass. "Sorry," the woman says. "No worries," I tell them, "the best seats are often right in the trail." When the man introduces himself as Stumpknocker, his wife says, "you may have heard of him," and I realize that I've met him before. "We camped together in 2011," I tell him, "just outside of Pearisburg." "Could be," he says, "I think I was on the trail that year." "We were camped with Tree Beard, the kid from Iowa who packed out two 16 oz steaks from Food Lion. He cooked one right on the fire, ate the whole thing and looked like he was going to be sick, but a half an hour later, he said 'I think I'll cook the second.' " &q
Read more